From the Idaho Department of Health and Welfare:

The first confirmation of death cap mushrooms (Amanita phalloides) in Idaho was recently reported to the Idaho Division of Public Health. An amateur mycologist spotted the mushroom under an oak tree in an established neighborhood in Boise. DNA testing by a laboratory pathologist confirmed the identification. It may be present and undetected in other areas.

Death cap mushrooms are highly poisonous and cause most deadly mushroom poisonings worldwide. They can look like edible mushrooms (such as paddy-straw mushrooms or puffballs), but eating as little as half a mushroom cap can kill an adult. A small portion can kill a dog. Cooking does not make the death cap mushroom safe to eat.

Early symptoms of death cap mushroom poisoning are persistent and violent vomiting, abdominal pain, and profuse, watery diarrhea 6 to 24 hours after eating the mushroom. These symptoms generally last a few hours, after which there is an apparent recovery with no symptoms for a few days. Then jaundice, loss of strength, coma, and death can occur from liver failure and kidney failure.

Early treatment is critical to decrease the chance of dying or needing a liver transplant.

When in doubt, throw it out!

Death cap mushrooms are not the only poisonous mushroom in Idaho. Generally, do not eat any wild mushroom that has not been identified by an expert. See wild mushroom identification and buying guide at https://publicdocuments.dhw.idaho.gov/WebLink/DocView.aspx?id=21978&dbid=0&repo=PUBLIC-DOCUMENTS

When in doubt, throw it out!

What to do for potential mushroom poisonings

If you or your child has eaten an unidentified wild mushroom, call the poison center at 800-222-1222 right away, call your healthcare provider, or to go the emergency room.

If your pet has eaten a wild mushroom, call the ASPCA Animal Poison Control Center’s 24-hour hotline at 888-426-4435 or your veterinarian or veterinary emergency clinic.

What to do if you find them in your yard

Death cap mushrooms are found near imported trees in gardens, parks, and urban areas but can spread to wild areas over time. In other regions, death cap mushrooms appear in late summer through December, or year-round. Seasonal risk in Idaho is unknown.

To help avoid spreading death cap mushrooms to other areas, remove the mushrooms from your lawn before mowing. Grasp the mushroom low on the stalk and pluck it from the soil.

There is no evidence that hand contact with death cap mushrooms is dangerous, but wearing gloves will protect your skin from germs in the soil. Wash your hands thoroughly after touching the mushrooms or surrounding soil.

Submit photos of death cap mushrooms to iNaturalist.org to help track the spread of this mushroom in Idaho.

Image above used with permission from Paul Kroeger, courtesy of the Beaty Biodiversity Museum. 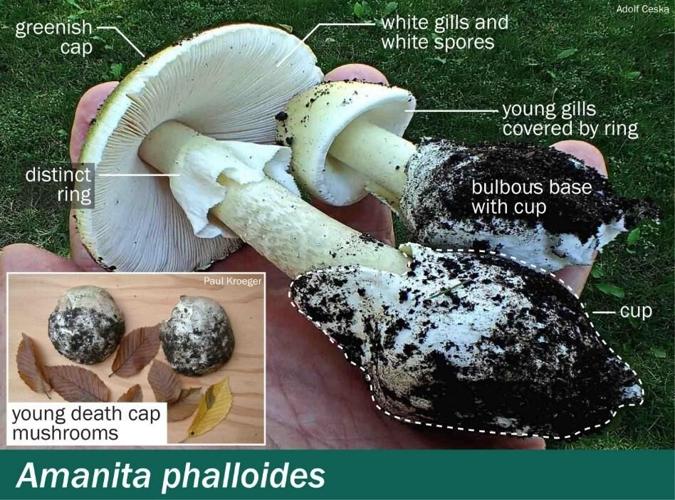 Image above used with permission from Adolf Ceska and the Beaty Biodiversity Museum. 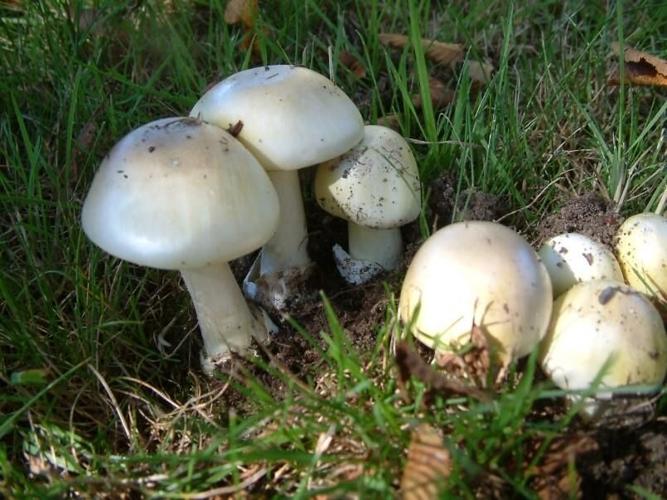 Image above used with permission from Paul Kroeger, courtesy of the Beaty Biodiversity Museum.

Image above used with permission from Adolf Ceska and the Beaty Biodiversity Museum.